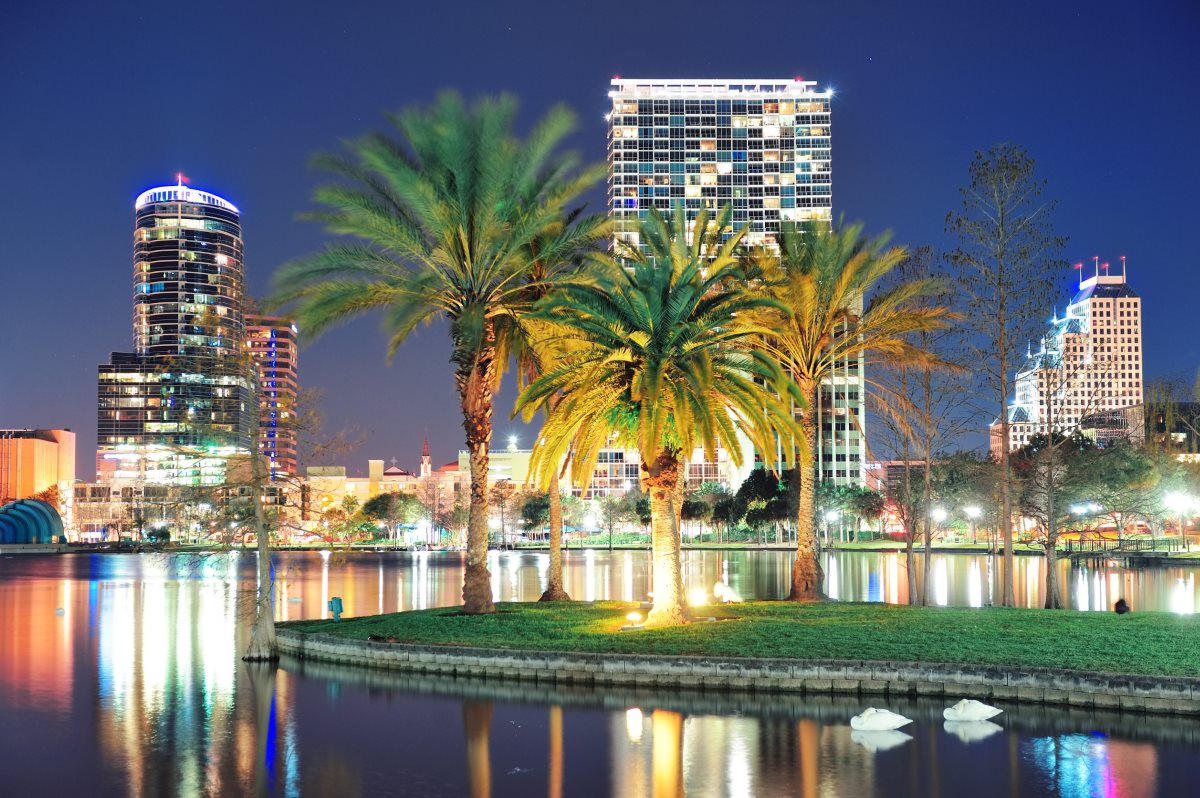 LEGOLAND Florida Resort opened LEGO NINJAGO World on Jan. 12, 2017. The new immersive land is a training ground for future ninjas, including an interactive ride where guests blast fire, lightning and ice with their hands.

Topgolf Entertainment Group is one of the top golfing entertainment complexes in the world set to open a new location in Orlando in early 2017. The 65,000-square-foot venue will include 230 high-definition flat-screen TVs, 102 climate-controlled hitting bays that can host up to six players at one time, and advanced technology to track the accuracy and distance of players' shots.

Luke's Kitchen and Bar is the third restaurant for Chef Brandon McGlamery, of Luma on Park and Prato. Now open in Maitland, Luke's offers cocktails and American cuisine, such as oysters, a raw bar, soups and sandwiches, entrees cooked on open fire grill and rotisserie.

Reel Fish Coastal Kitchen & Bar is a new casual restaurant from Fred Thimm coming to Winter Park. It will be a contemporary version of a fish camp, offering fresh Florida seafood, and is set to open in February 2017.

Circo Orlando, a part of Le Cirque Restaurant brands, will be the top-level tenant at the new 10-story parking and retail structure next to Mango's Tropical Café Orlando. The 10,000-square-foot restaurant, offering high-end Italian cuisine, is slated to open in the second quarter of 2017.

LEGOLAND Florida Resort announced a new LEGOLAND Beach Retreat opening April 7. The new accommodations will include 83 single-story duplexes, a themed pool, sandy play area and new restaurant. Conveniently located adjacent to the theme park, the LEGOLAND Beach Retreat invites guests to relax beneath brightly-colored bungalows or dine below the new LEGO lighthouse, which will feature a buffet restaurant, pool bar and a beach-themed space for kids.

The Delaney Hotel will be a 54-room boutique hotel in the SoDo district of downtown Orlando, expected to be open by late spring 2017. It will offer unique high-tech conveniences for guests, from remote check-in, to digital tablet-based concierge services in every room, smart phone room keys and smart TVs.

Margaritaville Resort Orlando has been announced as a new resort property being developed by Encore Capital Management, expected to open late 2017. The waterfront destination resort will offer 175 rooms, 1,000 Margaritaville-themed vacation homes and 300 timeshare units. A new dining and entertainment district is also planned to accommodate guests, along with a 12-acre water park, a wellness center, miles of fitness trails and a destination water taxi system.

The Grove Resort & Spa - Just five minutes from Walt Disney World Resort, the Grove Resort & Spa is set to open in March 2017. The hotel will offer 878 two- and three-bedroom residential-style suites with full kitchens, washers & dryers and multiple bathrooms to provide all the comforts of home. Additional amenities include several full-service restaurants, bars, a grab-and-go marketplace and a family-friendly water park.

Omni Orlando Resort at ChampionsGate is undergoing a $40 million expansion project, which includes 93 new guest rooms, 100,000 square feet dedicated to meeting and event space and a revamped Trevi's restaurant with an outdoor bar and terrace .

A Multipurpose Soccer Stadium is scheduled to open prior to the 2017 Major League Soccer season. The stadium will be located in downtown Orlando in a developing entertainment center a block away from the Amway Center. The stadium will seat 25,500 and serve as home to the Orlando City Lions soccer team.

Walt Disney World Resort announced plans for two historic themed land expansions, bringing the far, far away galaxy of Star Wars and the colorful world of Toy Story closer to guests at Disney's Hollywood Studios. Both new lands are under construction, and details are still being kept under wraps, but a signature attraction has been teased that will allow guests to fly the Millennium Falcon at the new Star Wars land.

SKYPLEX, a new entertainment complex on I-Drive, is set to break world records by bringing the world's tallest roller coaster to Orlando in 2019. The 570-foot-tall (174-meter) structure will be the tallest in Central Florida, and feature the first Polercoaster, a vertical ride dubbed the Skyscraper, weaving in and around the whole tower on coaster-length tracks. The SKYPLEX tower will also offer views of the city via an observation deck, restaurant and lounge at the top. Additionally, a second ride, called Skyfall, will be will be the world's tallest drop ride once it opens, rising up to 460 feet (140.2 meters) and then dropping riders at 90 miles (144.8 km) an hour.

Universal Orlando Resort announced the sixth and newest addition to the lineup of hotels on property, Aventura Hotel. A value property, the 16-story gleaming glass tower will consist of 600 guest rooms, including 13 kids' suites. It will bring the total number of on-site hotel rooms at Universal Orlando to 6,200 when combined with the 400-room expansion of Universal's Cabana Bay Beach Resort, opening in 2017.The Aventura Hotel will feature the first-ever rooftop bar and grill on Universal property, and offer exclusive amenities including Early Park Admission to Universal's theme parks, complimentary on-site transportation and more.

All Aboard Florida is introducing Brightline, an express train service for intercity travel in Florida. Brightline will transport passengers at speeds between 79 and 125 miles per hour, using the existing Florida East Coast Railway corridor between Miami and Cocoa, along with new track between Cocoa and Orlando. Services will begin between Miami and West Palm Beach in 2017, with service from Miami to Orlando to follow. Upon completion, travel from Miami to Orlando will only take about three hours. Phase Two of Brightline will include a station at Orlando International Airport, within the future South Terminal.

Orlando International Airport is building a new, $1.8 billion south airport terminal near the current airport, adjacent to the $1.3 billion train station also under construction. The train station and gates 16 to 21 of the south terminal are scheduled to be completed in 2019, and will feature indoor palm trees, interactive video screens and a moving sidewalk through a straight strip, “the boulevard,” that spans the different components of the new terminal: ground transportation, ticket hall, concessions, screening and gates.

New Within the Last Year

SeaWorld Orlando brought new thrills to Orlando in 2016 with Mako, a brand new 200-foot-tall coaster opened in summer. Named for one of the ocean's fastest known sharks, it is Orlando's tallest, fastest, and longest roller coaster, reaching speeds of 73 mph as it races along 4,760 feet of steel track.

Busch Gardens Tampa opened a new family thrill ride called Cobra's Curse in June 2016. This spin coaster is the only one of its kind in the world, featuring a vertical lift and taking riders on a whirlwind adventure of exciting explorations.

Main Event Entertainment at Pointe Orlando is now open. The 45,000 square-foot (4181 square-meter) dining and entertainment complex offers everything from America fare and handcrafted cocktails, to more than 100 virtual and interactive games, state-of-the-art bowling and the first free roam multi-player virtual reality game in the U.S.

Frontera Cocina, a new Mexican dining concept from Chef Rick Bayless, opened at Disney Springs in July, 2016. Chef Bayless is a six-time James Beard Foundation winner, aiming to showcase the gourmet Mexican cuisine that has made him a culinary legend at Frontera Cocina.

STK Orlando joined the host of new venues at Disney Springs, opened in May, 2016. The upscale steakhouse blends two concepts into one—the modern steakhouse and a chic lounge. Unique features include a live DJ, high-energy atmosphere and a sleek environment designed to encourage guests to interact and mingle.

Homecoming: Florida Kitchen and Southern Shine, owned by celebrity Chef Art Smith, is bringing a taste of real Florida to Disney Springs. The new restaurant opened in July 2016, and showcases the cuisine of Chef Smith, who was born and reared in the town of Jasper, Fla., on the Florida-Georgia border.

DoveCote, a twist on the Classic French brasserie in downtown Orlando is now open. This is the newest project for James Beard nominated chefs, James and Julie Petrakis, who also own Winter Park's Ravenous Pig, Cask & Larder and Swine & Sons.

Toothsome Chocolate Emporium & Savory Feast Kitchen is a new full-service restaurant at Universal CityWalk that offers a wide variety of dishes – from all-day-brunch crepes and quiches to unique takes on classic steak, seafood, pasta and more, plus an array of gourmet chocolates and desserts. The restaurant is themed as a 19th century inspired, Steampunk-era chocolate factory and located near the entrance to Universal's Islands of Adventure.

The Bear and Peacock Brewstillery in Winter Park is now open. Serving beers and liquors brewed on premises, the venue offers an atmosphere of serious artisanal workplace mixed with cozy hangout.

Cask & Larder at Orlando International Airport, another expansion for the Petrakises,  is now open. The airport outpost for the popular Winter Park restaurant that was named one of Esquire magazine's Best New Restaurants in America in 2014, is the first restaurant at the airport to specialize in seasonally driven cuisine and locally sourced ingredients.

Hyatt Regency Orlando International Airport opened a newly re-imagined Hemisphere restaurant this fall on the ninth floor, known for its epic sunrise to sunset views of the airport runway.

Home to seven of the world's top theme parks, Orlando is the No. 1 family vacation destination, theme park capital of the worldSM, and most visited destination in the United States.  An unparalleled mix of unique experiences create cherished memories for visitors, including legendary theme parks from Disney, Universal and SeaWorld, an array of world-class water parks, entertainment venues, an award-winning food scene, shopping, sports and nightlife. And, with 450 hotels, Orlando offers more lodging options than nearly any other destination in the world, from expansive resorts to uniquely themed hotels.